Editor’s note: David Krumboltz’s regular column is on hiatus until further notice due to the COVID-19 pandemic. In its place, we’re running some of Dave’s favorite past columns. This one originally ran in April 2017.

The car and the company were called Pierce-Arrow, but that wasn’t how they started. The history goes back to 1878, when George Pierce started a company that made birdcages, bathtubs and bicycles. He made his first car in 1901, but it was in 1904 when the Great Arrow was introduced at the hefty price of $4,000 (about $108,000 in today’s dollars) that established the reputation of the car and the Buffalo, New York, company.

In those days, durability and endurance were the true quality tests of motor vehicles. The Glidden Tours were the Super Bowl of automotive quality testing, and Pierce-Arrow won five annual tours in a row starting in 1905. The length of the tour increased each year, starting with an 1,100-mile tour, and by 1909 the tour was from Detroit to Kansas, a distance of 2,637 miles under difficult road conditions.

Another fan of Pierce-Arrow is San Leandro resident George Teebay. He owns this issue’s 1918 Pierce-Arrow that was restored 30 years ago, as well as five other Pierce-Arrows.

“I bought the car in January of last year. I have been interested in acquiring this car since I first saw it in 1998,” Teebay said. “I had some discussions with the owner in 2001, but he didn’t want to part with it.”

Finally, the owner contacted Teebay, and they made a deal. Teebay didn’t want to discuss the purchase price or current value but admitted it was in six-figure territory. He believes there are probably 50 to 60 of these models still in existence worldwide.

When new, the base price for this Pierce-Arrow was $6,400, or about $112,800 in today’s dollars. It has a huge six-cylinder, 525-cubic-inch engine producing 110 horsepower. The right-hand-drive car has a four-speed manual transmission that uses the standard “H” shift pattern. The transmission is not synchronized, so double clutching is necessary to shift gears.

The shift lever along with the hand brake are to the right of the driver, so there is no right front door. Two spare tires are strapped to the driver side running board, which is extended slightly for that purpose. The driver either enters from the left front door by stepping over the left front seat, or from the right rear door. The company patented the distinctive in-fender headlights in 1914. The car has dark brown fenders with the body painted a medium green. The factory would paint a car any color the buyer wanted for a fee, but this design and the stripping are period-correct. The top does fold down, but it takes two people to do it, which is not an easy task.

“These were very fast cars for the day,” Teebay stated. “Most cars in 1919 had a comfortable cruising speed of about 35 mph. Of course, most of the roads were dirt or gravel at that time. This Pierce-Arrow cruises comfortably at 50 to 55 mph.”

“You slow it with the foot brake, then you finalize the stop with the hand brake,” Teebay explained. “I like to tour it. From January through November, I put 1,800 miles on it. Part of it is the new toy syndrome, but it is just a delight to cruise in, and I travel with a group. I’m going on a five-day tour out of Murphys (in Calaveras County) next April.”

I got an excursion, and it was impressive. The 99-year-old car has a self-starter and the motor purred like the preverbal kitten, or maybe a very big cat. I could tell Teebay was a veteran Pierce-Arrow driver, as he double clutched the gears with nary a grind. It climbed steep hills in high gear, and he could stop the 5,100-pound car without difficulty. The 142-inch wheelbase gives the elegant car a smooth ride. I could see why this was a favorite among the Downton Abbey class. What happened to Pierce-Arrow? It’s another sad automotive story.

“It was the Depression that killed them,” Teebay said. “There were people who could afford a new Pierce-Arrow but didn’t want to flaunt their wealth when there were so many people in bread lines.”

Have an interesting vehicle? Contact David Krumboltz at [email protected] To view more photos of this and other issues’ vehicles or to read more of Dave’s columns, visit mercurynews.com/author/david-krumboltz.

Tue Sep 8 , 2020
TAICHUNG, Taiwan — Because gyms are closed and we could all use a little more exercise; because we are avoiding buses and trains; because we are in need of outdoor group activities; or perhaps just because the pandemic has made us crave simple pleasures like the wind against our faces, […] 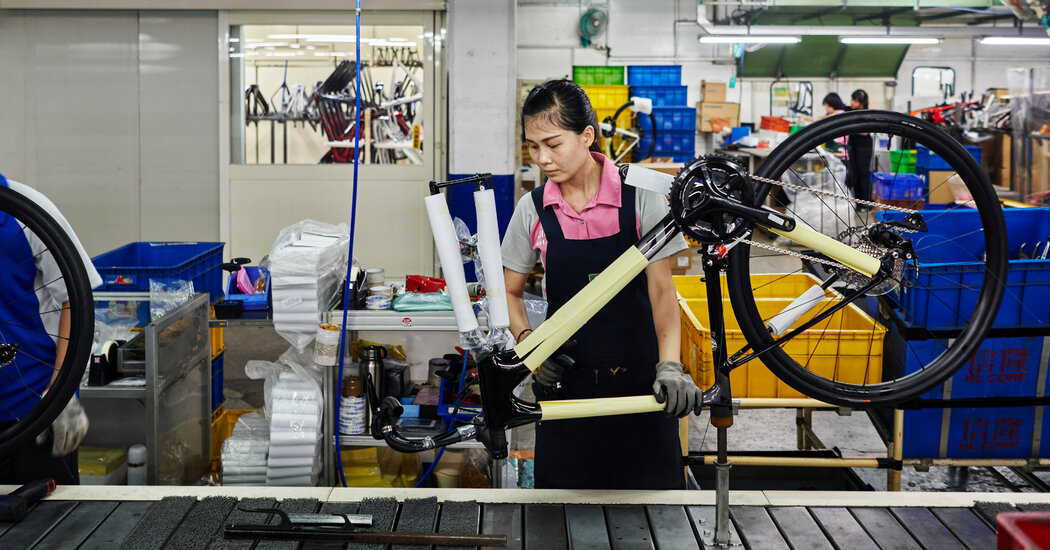