PHILADELPHIA, PA – August 11, 2020 – (Motor Sports NewsWire) – What will it take to cross our planet’s final frontier by bicycle?  It is about the Bike…and the Rider as expedition cyclist, Dr. Kate Leeming, prepares to make the first bicycle crossing of the Antarctic continent on a Christini all-wheel drive (AWD) fat bike late in 2021.  The 1150-mile journey from the Leverett Glacier on the Ross Iceshelf to Hercules Inlet on the Ronne Iceshelf via the South Pole will take approximately 45 days at temperatures plummeting to -40F degrees.

As an expedition cyclist, prior to her quest to make the first bicycle crossing of the Antarctic continent, Kate had already pedaled a distance greater than twice the world’s circumference and achieved four world firsts on her major journeys, through Europe, across Russia, 25,000km through Australia and 22,000km west to east across Africa (from Senegal to Somalia). In 2013, Kate started her Antarctic quest and has done four polar training expeditions in Svalbard (Norway), Northeast Greenland, Arctic Canada and Iceland to test each Christini AWD Fat bike as they were being developed, and to learn how to deal with the extreme cold.

Since 2018, Kate has undertaken to do a preparatory expedition on each continent (except Antarctica) – in either polar conditions, on sand or at altitude. She’s now completed journeys down the Baja Divide in Mexico, Iceland, the Finke River in Central Australia, the Indian Himalaya, Namibia’s entire coastline (the Skeleton Coast) and lastly in the Andes, where, pedaling on a Christini 27.5 AWD MTB, she had to postpone her mission in Bolivia, after 1100km due to COVID-19. 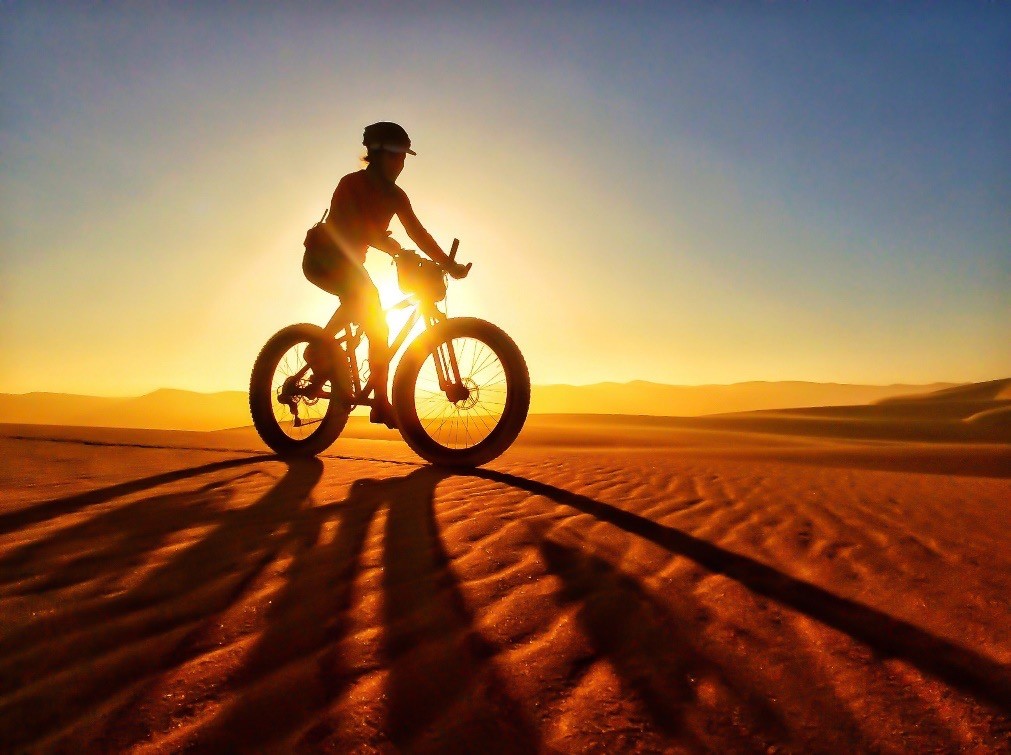 Alongside her journeys Kate always contributes, particularly through her Breaking the Cycle Education program, to improve understanding about poverty and inequalities and support the environment. She has written two books and co-produced two feature films about previous expeditions.

“Real exploration cannot be done through a screen or second-hand; true perspective must be obtained first-hand as primary evidence.  The great explorers and creators of history have known this, and it remains the same today,” says Dr. Leeming.  Her accompanying camera crew needs to be hearty as well and includes Claudio von Planta, documentary filmmaker for the motorcycle productions of “Long Way Around” and “Long Way Down” (and coming soon, Long Way Up) featuring Ewan McGregor.

Dr. Leeming’s Breaking the Cycle Education initiative is aimed at helping our future leaders make informed decisions to create a better world.  Monies raised by the Breaking the Cycle South Pole Project will go towards ventures in Kenya and South Africa that support access to education.  She is also a role model inspiring young girls and women that demonstrates resilience, determination and commitment to aim high achieving their whole potential.

All-wheel drive bicycles and off-road motorcycles have been manufactured for the market by Christini since 2001, but now these traction-grabbing, pedal-driven machines are available in several different mountain bike configurations which excel over slippery rocks, wet roots and ice like no other single, rear-wheel driven bicycle.  The drive shafts and universal joints needed for the AWD functionality only add 2.3 pounds of weight making this feature well worth its weight in traction-gold. “Having a driven front wheel which “pulls” the bicycle and rider forward in addition to the traditional rear-wheel “push-drive” mechanisms will make this feat possible for Kate.  The 5” flotation tires keep her on top of the snow-covered ice while all-wheel drive gearing transports her across just about any terrain Antarctica can throw at her.  We are ecstatic to be a part of this incredible human endeavor,” says Steve Christini, founder and owner of Christini Bicycles and Christini Motorcycles.

About “Breaking The Cycle” Sponsorship Opportunities

Discover more at: http://www.breakingthecycle.education/partners/sponsors/   Kate has so far attracted more than $250K to support her preparatory expeditions and films to get her to the Antarctic start line, but is still in need of a title sponsor.  Sponsors currently include Christini Bicycles, Mont Adventure Equipment and Australian Geographic.  Several television and feature-length documentaries are now in their formative phases. Dr. Leeming can be contacted directly at [email protected].

About Breaking the Cycle Education

Dr. Leeming and Breaking The Cycle Project aim to inspire students to lead their schools, communities, countries and the world in making positive change by utilizing Kate’s journeys as a source of innovation and creativity.  Embedded in the program are the United Nations Global Goals for Sustainable Development enabling students to be inventors, innovators and campaigners.  Students will be challenged to create projects that address key global issues around them and put into action their classroom explorations before, during and following the expedition. www.breakingthecycle.education

About Christini AWD Bicycle and Motorcycles

Christini has been the leader in 2-wheel drive (AWD) bicycles and motorcycles since 1999.  The company currently manufacturers AWD motorcycles for more than 12 military special forces around the world along with the U.S. Army and Border Patrol.  Christini AWD motorcycles have also been chosen by several winning professional riders of extreme motorcycling events like Erzberg and King of the Hammers.  The AWD motorcycles are street legal on all roads and trails. Christini E-MTBs are Class 3 pedal-assist only without a throttle and a maximum speed of 28mph. www.christinibicycles.com www.christini.com

Wyoming by bicycle: Two brothers get cranky for a week in the Cowboy state | Local News

Fri Aug 14 , 2020
About 50 miles into a week-long, 400-mile bicycle ride with my brother last week my right pedal fell off. My brother Tim and I were riding over Sylvan Pass in Yellowstone National Park when the disaster struck. I looked at the pedal and the crank and wondered if our trip […]