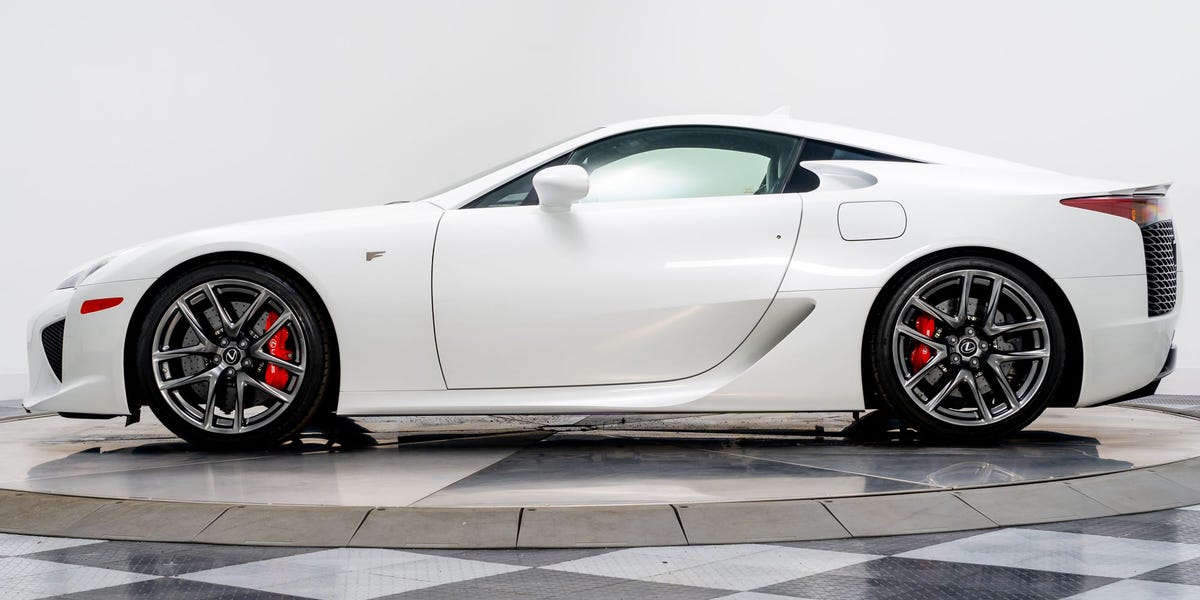 Each experience offered in a luxury vehicle is tightly controlled by the brand whose badge sits on the hood. Moving beyond the comfort of the seats and the responsiveness of the engine, this also includes every single sound that reaches your ears, from the time you open the door to the moment you hit the “lock” button on your key fob and walk away.

Automakers are increasingly concerned with creating a unique audio experience for driver and passengers, and it’s one that extends past the number of surround speakers sprinkled throughout the cabin or watts pumped out by each individual amp. Instead, greater and greater focus is placed on the entire range of noises — or lack thereof — produced by a vehicle in nearly every facet of its operation. The addition, subtraction, and outright fabrication of sound are all key elements of modern automotive design.

Chances are you’ve never given a second thought to the subtle symphony produced by your car or SUV. This is by design: An automobile’s aural character is intended to be complementary rather than obtrusive, with tones you’re meant to hear mixed in with secret sweetening that’s intended to be imperceptible to the conscious mind, all while the roar of the outside world is actively and invisibly attenuated.

Quiet and calm cabins have long been a luxury car hallmark, but until recently they relied on passive design traits to insulate occupants from the hustle and bustle of the highway. Laminated acoustic glass, mass-loaded materials in the floorboards, firewall and door panels, and triple-sealed doors and windshields formed the first line of defense for preserving the peace inside a high-end automobile’s cabin.

The added weight of these items, however, had an impact on fuel mileage, not to mention the extra cost associated with the materials and their installation.

Just over a decade ago, car companies began to investigate active noise control, or ANC, as a way to reduce its reliance on heavy insulation.

Also known as noise cancelation or active noise reduction, ANC uses a system of microphones to pick up unwanted noises inside a vehicle — booming expansion joints, the whirr of tires, the not-so-smooth acceleration of a four-cylinder engine — and then runs them through a digital signal processor in order to generate a counter-wave of sound of opposite phase. When the two sound waves collide, they effectively “destroy” each other or cancel each other out, with the end result dramatically lowering their volume inside a controlled space.

As the tech began to spread through the industry, engineering teams were especially keen to use active noise reduction to eliminate buzzing and air intake sounds associated with the flood of small displacement turbocharged engines that have become the norm for luxury cars.

A signal processor and a scattering of microphones are certainly much lighter than extra glass and a floor pan filled with rubber insulation, and ANC tech has by now propagated across most of the luxury segment, particularly at the entry level where investments in thicker materials are harder to recoup via the sticker price. These systems, which are sometimes produced in partnership with audio technology leaders such as Bose and Harman, work through the existing stereo system speakers in a completely transparent fashion.

In many respects, they’re identical to the technologies used in noise-canceling headphones popular with commuters and air travelers, only tuned for more specific frequencies (usually below 250 HZ) and deployed across a much larger area than the circumference of your skull.

Muting some sounds while amplifying others

It wasn’t long before car companies realized that these same, near-undetectable sound wave generators could be repurposed to accent pleasurable sounds the same way they masked troublesome ones. It’s fair to say that noise cancelation itself created a new problem for luxury car engineers to solve, in that new vehicles were so quiet that their owners became disconnected from the visceral aspects of driving.

It’s here — just a few years after the triumph of ANC — that automakers began to assume a much more active role in shaping the sonic character of their vehicles. Rather than simply install a louder exhaust system, as would have been done in the past, design teams began to stir a little sugar into the stereo system by way of artificial engine noises generated by similar signal processors that’d once been used as a vault door against unwanted intrusion. These sounds were linked directly to factors such as engine speed and driving mode, allowing them to remain faithful to the experience of the pilot while at the same time providing an on/off switch for those who preferred to enjoy the silence.

Implementations of this new technology were as varied as the marketing forces behind the vehicles that pioneered its adoption. The inaugural “Active Sound Design” system installed in the 2012 BMW M5 relied on the standard infotainment system speakers already found in the cabin. Later implementations of the BMW’s setup would include full control for occupants over how much secret sauce they wanted when the gas pedal was floored, with even relatively pedestrian models gaining the sheen of high-performance driving — at least to the ear.

Other brands installed a separate system to handle these duties exclusively. Some versions of Audi’s “Soundaktor” would merely amplify engine bay sound and transmit it to the cabin through the firewall or windshield, while some played a digital audio file through a speaker mounted in a similar location. This technique was occasionally modified by automakers, often in the form of a small tube linking the under hood area to the passenger compartment, which was then tuned to filter out unwanted frequencies while amplifying those most often associated with a high-performance engine.

A few companies eschewed the digital route and instead went to extremes to preserve a “direct” connection between the ear and the engine, most notably in the Lexus LFA supercar. Lexus turned to Yamaha not just to tune the engine’s performance (via Yamaha Motor) but also engaged the corporate behemoth’s music division to design the acoustics of its 10-cylinder engine using a surge tank in the air intake combined with materials in the firewall itself. Porsche would follow with the “sound symposer,” a feature that provided an elaborate audio pathway between the rear-mounted engine and the peaceful-until-button-push cabin.

Over time, the digitally-generated speaker soundscape pioneered by BMW and Audi would sit comfortably alongside Porsche’s scheme for pumping engine bay audio directly into the cabin. Even companies that had held out against this newly tuneful future would face regulatory realities that would push them toward artificial sweeteners. Mercedes-AMG, for example, discovered that designing two sets of exhaust systems — one quiet enough to pass European regulations and the other loud enough to tantalize American buyers — would be far more expensive than simply installing a sound enhancer of its own, and so muted its tailpipes across the board in favor of a software solution.

Even electric vehicles have gotten into the sweetened sound act. Ford is equipping offerings like the Mustang Mach-E with a suite of sounds that mesh the recorded V8 burble of the past with an artificially-generated audio identity that’s linked to engine torque production and broadcast to the driver through the stereo.

Electric vehicles look for ways to compensate for quiet engines

Battery-powered cars have also revealed that there’s a utility to automotive noise that stretches beyond the desire for drivers to make a mechanical connection — no matter how artificial — while shifting gears. Nearly noiseless electric vehicles have found themselves facing the opposite problem when confronted by regulators in both Europe and North America of the dangers associated with their silent running.

Simply put, a quiet car is one that gives animals, pedestrians, and cyclists no warning of its presence, which poses a danger not just to the general public but also sight-impaired individuals who have come to rely on traffic noise for their safety. In recognition of this, the National Highway Traffic Safety Administration required that at least half of an automaker’s electric fleet be required to produce some type of audible tone when operating at speeds of up to around 19 mph (above which road and wind noise itself becomes enough of a warning). A similar requirement exists across the Atlantic, where electric vehicles must include an Acoustic Vehicle Alert System that is active at speeds of less than 12 mph.

Naturally, automakers want control over what their EVs will sound like, too, and it looks like they’re going to get it. In America, the NHTSA has already stated that it won’t be locking in a specific tone for each vehicle and electric car owners will even be allowed to select from a palette of sounds to best reflect their taste. Several European automakers have already gotten a headstart on tuning up their battery-powered models with a variety of noises.

The sound of success

Transforming lines of computer code into engine sounds and noise canceling are only the tip of the audio branding spear. Car companies are fighting a battle for the ears of buyers by upping the ante on interior notifications, tagging in symphony orchestras to record those forgettable chimes that keep you from locking your keys in the vehicle. Then there’s the field of “psychoacoustics,” where designers obsessively tune even the sound of a vehicle’s door closing to impart a stronger sense of confidence in its build quality, or in the case of Rolls-Royce, shift the pitch of every noise that makes it through to the cabin until it all sings harmoniously along the same subtle note.

Audio engineers seeking to control the concert hall inside a specific vehicle is a perfect example of technology enabling the extension of a brand into an entirely new space for luxury car buyers. The appeal is easy enough to understand, as every vehicle in the lineup can now sound remarkably similar despite featuring dramatically different engine types under the hood from one model to the next. Throw in the uplifting swell of sound as the dashboard illuminates, the reassuring “thunk” of a vault-like door pull, and the peaceful trappings of a noise-canceled highway cruise, and it’s all part of an aural imprint that seeks to mesh with automaker’s visual styling and create the most cohesive possible package in an increasingly competitive market.

After Failing in Mobile, BlackBerry Wants to Conquer the Automotive World