© Provided by Hindustan Times
The labourer from Dhar wants to give his son bigger opportunities through education. (HT Photo)

A tribal labourer from Madhya Pradesh’s Dhar district, 251 kilometres south west of capital Bhopal, pedaled a bicycle for about 105 kilometres to take his son to an examination centre at the district headquarters on Tuesday, according to the labourer and his son.

Shobharam, a resident of Bayadipura in Manawar tehsil of Dhar district, was spotted by people at Dhar district headquarters on Tuesday morning when he reached the examination centre– Bhoj Girls Higher Secondary School– pedalling the bicycle with his son, a class 10 student, sitting on the frame of the cycle.

Shobharam said, “After the lockdown restrictions buses came to a halt. The buses are not operating even now. There was no one to help me at the village, hence I decided to come here on my bicycle. I left from Dhar on Sunday night itself and stayed overnight at Manawar town. I reached Mandu at 4 am on Tuesday and the exam centre at Dhar just 15 minutes before the examination was to begin.”

He said he will stay in Dhar till August 24 when his son’s examinations will get over. He has brought food grains and other essential items to cook meals stuffed in a gunny bag which he carried on the bicycle.

He said, “Though I am a labourer and not a literate, I have a dream for my son that he becomes an officer. Since there is no teacher and tuition available in the village, my son couldn’t get good marks in three subjects. We came here since my son didn’t want to lose the opportunity to write the exam again and pass it.”

Shobharam’s son is supposed to write his exam under MP State Open School Board’s Ruk Jana Nahi scheme under which the students of class 10 and 12 who couldn’t pass the examinations conducted by MP Board of Secondary Education are given another chance to clear the test. But since the re-exam centre was chosen at the district headquarters, the father and the son had to travel more than 100 kilometres.

The boy said, “I didn’t lose my chance. I insisted on reaching Dhar and writing the examination, but since there is no bus service my father said he would take me to the examination centre.”

Assistant commissioner, Tribals Welfare department in Dhar district Brijesh Chandra Pandey said, “I came to know about the painstaking efforts of both father and son. It’s really inspiring. Since they are supposed to stay here till August 24, we have made an arrangement for their lodging and food and we will also make arrangements for their travel back to their village.”

Sat Aug 22 , 2020
An EHang 216F firefighting AAV sprays fire retardant foam into a high rise building during a … [+] demonstration in Yunfu, China EHang Holdings Ltd You may have heard of EHang, the Guangzhou, China-based drone and autonomous aerial vehicle manufacturer, which has been pushing its unmanned electric VTOL technology in […] 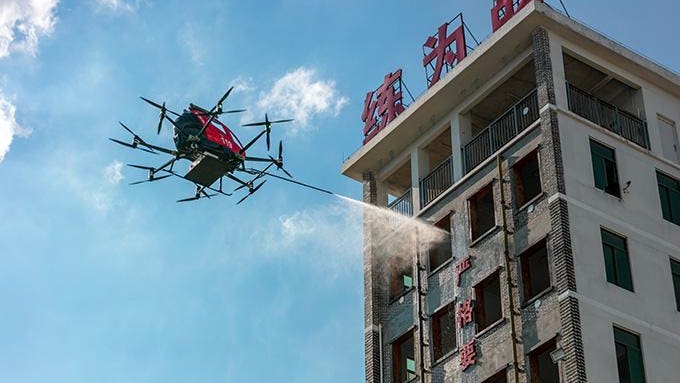